Being A Bloke, I Thought It Would Go Away, But It Didn’t

Diagnosed with metastatic melanoma in November 2017 and given just a 15% chance of surviving until the following Christmas, Shane Callaghan shares his story of hope and inspiration in the face of a devastating prognosis. 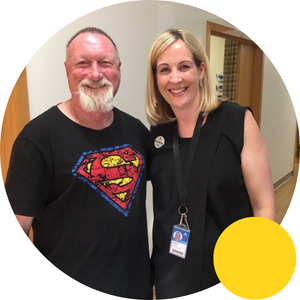 Shane was initially diagnosed with melanoma on the top of his head in 2015 at the age of 51. It was a small sore on a bald patch on his head which had been there for a while. “Being a bloke, I thought it would go away, but it didn’t,” Shane says.

He decided to get it checked out as it was bleeding a bit. His GP immediately said that it looked like a melanoma and Shane was referred to a specialist, who removed the mole and surrounding tissue. He also had some of his lymph nodes removed.

Shane says, “At that stage my lymph nodes were all clear, and I got on with my life. But the thing about melanoma is that it can sneak back in, and about a year later I developed a large growth on my head. My specialist cut it open and it was black. He said how sorry he was, but that my melanoma was back. My wife Heather was with me when I got the news and nearly passed out, she was so devastated.

“I was pretty stoic and didn’t say too much. I was booked in for a PET scan on the morning of my birthday, and that night, when I was having dinner with my family, I got the call nobody wants from my specialist. I put the phone on speaker, and we were told that my melanoma was terminal stage 4 and had spread to 11 areas of my body, including my lungs, spine, liver and shoulder.

“Everyone started crying but I decided at that point I needed to be strong for my family and I was not going to give up; I was going to fight this awful thing. I don’t like a lot of drama or emotion and when I was offered treatment I remember saying to my oncologist, Dr Rosalie Stephens, let’s just get on with it. She was amazing; even though my diagnosis was terrible, she gave me hope.

“I had radiation on my spine initially as that tumour could have left me immobile. I then started on the immunotherapy drug Keytruda every three weeks over two years and 10 months, which thankfully shrank the tumours – we stopped treatment at number 50. I would be dead if Keytruda hadn’t worked.

“Late last year I had another PET scan, and this time I was given the fantastic news that my scans were clear and the cancer was gone. I did have to have my appendix out as there was a small shadow on it, but it too tested all clear. I really want to get the message out there about the importance of protecting yourself and your loved ones from this awful disease.

“I got to know lots of people with melanoma when I was going through treatment, and we lost too many. The thing is, if you get it early it is nearly always curable, but way too many people are being diagnosed too late. If you notice any changes to your skin, don’t wait, get it checked.”

“I never really thought too much about sun protection on my head; sure, I would wear a hat sometimes, but I was never super vigilant. I now have a huge crater on my head that resembles a drink holder, and I don’t want anyone else, particularly kids, to have to go through that.

“I joined a Facebook support group when I was diagnosed, ‘melahomies’, which was set up as a way of connecting with others impacted by melanoma, and sharing our stories to help others. I have been really struck by the diverse range of people who get melanoma. It doesn’t discriminate – it’s not an older person’s illness, it can, and does, strike people of all ages, including younger people too.

“My strong advice is to cover up when outside, including wearing protective clothing and hats. Use sunscreen, and remember to sit in the shade – simple things that could save your life, or the life of someone in your family. I still see too many kids running around with sunburn and it’s not okay. We really need to be educating our children on the importance of being careful from a young age, so they develop good habits early.

“I got to know lots of people with melanoma when I was going through treatment, and we lost too many. The thing is, if you get it early it is nearly always curable, but way too many people are being diagnosed too late. If you notice any changes to your skin, don’t wait, get it checked.”

Tags: melanoman | skin check | treatment
← Prev: It Is Always In The Back Of My Mind That I May Have Only 5-10 Years To Live Next: You’re the most important asset on farm - ‘don’t let a spot become a full stop’ →