I Nearly Skipped My Annual Skin Check Because of My Age

Jack Keeys was diagnosed with melanoma last year at just 24 years old. Thankfully, his melanoma was caught early, and after two surgeries, he was given the all clear by his specialist. 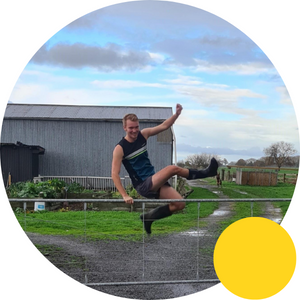 Jack was really shocked when he found out that the mole on his upper back was a melanoma. His dad passed away from the disease when Jack was 12 years old, and so although he had been getting regular checks, he thought his chances of developing melanoma were low because of his age.

“The scary thing is, I nearly skipped my annual skin check because of my age,” says Jack. “I was thinking about going the following year instead and I am really relieved that I didn’t wait; my skin check has probably saved my life.”

“Because of what happened to my dad, I’ve always known that I’m not invincible. But perhaps there was a little bit of that in me, thinking that it will all be okay because I am young”

Jack describes himself as someone who prefers to live outdoors – hiking, running, and playing sports. He’s always been aware of his skin, and has tried to be careful, but he admits that spending his life outdoors has meant that he did get sun tanned, and got burnt a couple of times each summer growing up.

Jack’s mum lives on a dairy farm just outside of his hometown Paeroa and has recently lost her partner. Jack has moved back home part-time, and is busy juggling helping with the farm, and his role as an Agri-Food Research & Insights Analyst at KPMG in Auckland.

Jack is also planning to run the Auckland Marathon in November this year, in red gumboots, to raise money for Melanoma New Zealand and the Rural Support Trust. Jack was a competitive runner in high-school, and it will be 10 years since his last race, where he won the New Zealand Championships.

“Wearing gumboots for the marathon is a bit of fun, and hopefully, will help raise the profile of the great work both charities do in our community, and also help them out financially too. I plan on running well, so I am training three to four times a week, including wearing gumboots running alongside the quad bike on the farm!

“Jack’s message is an important one for young people; be vigilant when outside, cover up, wear sunscreen, and make sure you get regular skin checks as it could save your life,” she says.

Get Your Gumboots On… And Join Jack!
Since Jack launched the initiative on social media, several people have reached out to get involved, so he now has some companions running the full marathon wearing gumboots, and others who are running in the shorter races also wearing gumboots! Jack is keen for more people to run in the marathon with him. To join in the red gumbootwearing fun, and to support Jack’s marathon effort, check out the following links: Givealittle: Facebook: Instagram