I never thought I’d be a widow at age 49

“He was only 53, and we’d been together for 32 years,” says Deb, who lives on Herald Island in Auckland. “I never thought I’d be a widow at age 49. David was my soul mate; I think of him every day and his untimely death has left a lasting impact on me, and our two children. 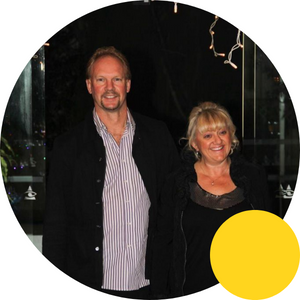 “It was such a shock to be told by the melanoma team at North Shore Hospital that this was stage four cancer, and terminal. Without an operation, radiotherapy, and trial drugs, we were told that there was no chance of him living even six months. “It showed up as a lump in his neck; we never actually found where the primary melanoma site was. He had a full dissection from the top of his ear to his shoulder, including the removal of 14 lymph nodes. However, six weeks later the cancer grew back aggressively in his neck and shoulder, and they had to remove his shoulder muscle. He lost all his nerve sensation and had huge scarring which was incredibly painful. “We exhausted every treatment option; we threw everything we had at this hideous disease. It was literally a constant battle for three years, there was no down time. The immunotherapy drug Keytruda wasn’t funded for stage four patients at the time, so we paid for it privately. “We were in the middle of renovating our home when David was nearing the end. He was on a lot of pain medication, but he was determined to finish it as he didn’t want to leave the house in a mess. He worked with our son, who is a builder, and two days after they completed the renovation, he went to bed and told me that he wouldn’t be getting up again. Two days later we lost him,” says Deb. “I’ve learnt that there is life and joy after tragedy, and I just really want to share our family’s melanoma story in the hope that it might prevent someone else going through what we have. I’m horrified when I see young people sunbathing on the beach, getting a tan. Tanning isn’t lovely, it’s damaging their skin and they could get melanoma. “David was an engineer and spent a huge amount of time enjoying the outdoors, fishing, snow skiing, and water sports, spending many days in the sun and on the snow. He was also incredibly fair skinned, so burnt really easily. I am just so careful with my skin now, as are the kids. They are more at risk too, with a family history, so we are super conscious of covering up when outside, using sunscreen, and getting regular skin checks.”