My dear father, Roger, passed away on 1st April 2011, one year after having been diagnosed with Stage 1V metastatic melanoma. A month prior to his diagnosis, Dad had been tramping and kayaking in the Abel Tasman National Park and was feeling fit and healthy. He had also been my wingman when I competed in the Coast-to-Coast, and his love of life and sense of adventure made him my hero. 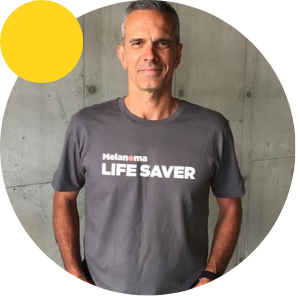 Dad was a farmer and had spent his childhood, teenage and middle years exposed to large amounts of sun with very little protection from the harsh rays. He had clear, dark skin and black hair, and like most of his generation, in the early years especially, he didn’t apply sunblock and only wore a hat in the height of summer. He loved the beach and fishing and was happy outdoors.

“Melanoma New Zealand took on a new meaning for our family as we learnt about the hard work being done by health researchers and medical science to find a cure for this disease.”

His dark skin became increasingly dotted with moles – large and small. He had his skin monitored for at least 10 years prior to his melanoma, knowing that his skin was suffering the bad effects of sun exposure. His dermatologist removed atypical moles and burnt others off during his yearly then six monthly checks. The one that got him was a tiny mole found on top of his head, under a beautiful thick head of hair, and had been there long enough and was deep enough that it had spread throughout the rest of his body.

Expert advice and care from skin specialists here and in Australia could not prevent his death, and we miss him every day of our lives. My greatest wish, and one close to my heart, is to help Melanoma New Zealand in its charity work and in the prevention of this cancer which claims the lives of many New Zealanders each year.

Tags: melanoma | skin cancer prevention
Next: Adine’s story: I had been a sun worshipper →