36-year-old Ben Mulqueeny had a clinic appointment at North Shore Hospital in March to review a large skin lesion thought to be a squamous cell carcinoma. The lesion had been present for 10 years but had rapidly increased in size in the last year. He was then sent for a CT scan which highlighted the skin lesion and some nearby lymph nodes. By April, his consultant had removed the mole and two subcutaneous lymph nodes. Unfortunately, histology showed melanoma in his lymph nodes, so he was sent for PET/CT and MRI of his brain to see if it had spread further. 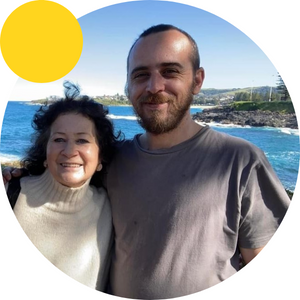 In June, Mr Martin performed a right partial parotidectomy and selective neck dissection. Pauline says, waiting to hear how the surgery went was horrendous, “When Clinical Nurse Specialist Helen Kinchley called to say it hadn’t spread, it was the best phone call I’ve had in my life.”

Ben was advised that adjuvant immunotherapy was the preferable treatment option following surgery in his case. However, because his melanoma was Stage 3D, he would not qualify for funded treatment, which Pauline says she found unbelievable considering the high rate of melanoma in New Zealand.

We’re not taking anything away from other cancers, but funding only seems to come in when cancer gets to a stage where there’s not much hope, and the patient can’t be operated on. It just doesn’t make sense. Fortunately, Ben had been a permanent resident in Australia and still qualified to have Keytruda funded through Medicare. When Prince Charles Hospital in Brisbane offered to treat him, plans quickly got underway to relocate to Queensland. Then floods hit the region and accommodation became scarce.

Because Ben had to begin his treatment within 12 weeks after surgery, they had to arrange for him to change to St George’s in Sydney, where a close friend offered to accommodate them.

Pauline soon discovered a six-week delay to their Medicare cards due to COVID-19 and flooding, so initially, they had to pay for everything upfront. “I had to get on the phone and start harassing people. As soon as my Medicare application was approved, I arranged for a local GP to do a referral and get all the scans done again before treatment began to ensure it hadn’t returned.”

In September, Ben finally started his treatment. Pauline says it is going well, apart from the constant exhaustion that he feels, which is a normal side effect of treatment.

They have spent close to $1000 of their savings on trains, buses, and Uber trips and have only recently been able to get financial help from Centrelink, which provides payments and services to support people with serious illnesses and those who care for them.

Pauline says considering all the variables they have had to deal with to get to this stage, she and Ben have realised they will not return to New Zealand for some time.

Looking back, Pauline now appreciates all the support they received from Ben’s healthcare team in New Zealand. She has had to navigate booking all of Ben’s appointments in Australia, from MRI scans to blood tests, which their New Zealand team would have sorted for them in New Zealand.

“I spend a lot of time chasing up departments, ringing around to make sure everything is sorted and taking all Ben’s paperwork to appointments to make sure they have everything correct. I’m sure a lot of people must struggle with that. It is so different from New Zealand.

“There also seems to be a lack of common sense – like when I applied for the Carer’s Allowance, I missed a phone call, which delayed the process. They didn’t leave a message or email, so I didn’t know they had held it up.”

Pauline and Ben wanted to thank Mr Martin and Helen Kinchley for their incredible support.  “We have probably been quite spoilt. There has been a united effort from family and friends, and everyone has played their part.”

Pauline’s daughter, Rachel, organised a Givealittle campaign to help them relocate, and Ben’s father gave them money to put towards accommodation.

“The whole process of leaving New Zealand was challenging and very rushed. All our family helped, but it was tough.”

One of the most upsetting things for Pauline was having to relinquish caring for her sister Tine, full time.

“That has been extremely difficult and heart-breaking because we didn’t have the time to prepare mentally and financially to go. Without our family’s love and financial support, we would not be here. It restores your faith in humankind.”

Although Pauline and Ben would be home in a heartbeat if they had a choice, neither of them takes anything for granted. They both feel incredibly blessed that Ben can have his Keytruda funded in Australia, unlike so many other kiwis in Ben’s situation who have to raise around $120,000 to be treated.

“If Ben’s melanoma was terminal, he would have been offered funded treatment in New Zealand.

“At Stage 3, who lives or dies depends on who can pay for treatment. It’s so unfair.”

Tags: funding | melanoma
← Prev: December Newsletter Next: Dr Sonja Bodley speaks with RadioActive.FM in Wellington about sunscreen and the importance of protecting yourself from the sun →

END_OF_DOCUMENT_TOKEN_TO_BE_REPLACED

Some useful skin check tools that we are promoting Skin self-exam video Use our Get To Know The Skin You're In - A...