42-year-old Victoria Hudson-Craig shares the inspirational and moving story of her fight against metastatic melanoma to encourage others to make sure they get any changes to their skin checked out.

Victoria was in her early 30s, sitting in a pub in Devon in the UK, when her sister noticed blood on her back from a mole that had been there for years. Once she saw her doctor, she was immediately sent to hospital to have it removed. 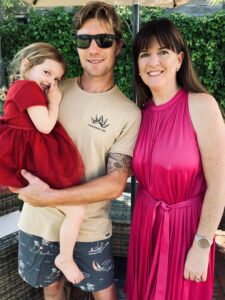 The biopsy results showed that it was stage 2B melanoma and after two surgeries, she was told it was all removed. Victoria says it was then that she decided to get on with life by moving to New Zealand to have more of an outdoor lifestyle close to the sea and ski fields.

She settled in Christchurch, where she met her husband Ryan and had daughter, Ruby. Life was good until 2020 when Victoria was admitted to hospital with appendicitis.

They were about to whip out her appendix, when a pre-surgical scan showed some lumps embedded in her heart muscle.

The medical team came into her room and told her they thought the lumps were metastatic melanoma tumours, which Victoria says put her in a complete state of shock.

“It was horrific news to deal with, compounded by the fact that the biopsy results were inconclusive and had to be sent offshore for further testing (which took an additional five months to be confirmed). “Apparently, it’s rare to have melanoma come back in your heart and nowhere else. It usually comes back first to other organs, such as your brain and liver.

“I didn’t experience any heart palpitations until late last year, so we may not have discovered the tumours if I hadn’t had appendicitis.”

Shortly after they discovered the tumours, Victoria started immunotherapy, but after nine months of treatment, the cancer progressed and a fifth tumour grew. This meant she no longer met the criteria to continue on funded immunotherapy. This was just before Christmas last year.

“I just went all out — I figured that if it was going to be my last Christmas, I would make it the biggest one yet!

“Thankfully, early in the New Year, I was told that there was a different drug combination they could try on my particular tumour type. Now, seven months later, my tumours have shrunk to the same size as they were when I was diagnosed in 2020.

“Unfortunately, the drugs are not funded and are extremely expensive, so I am not sure how long I can afford to remain on them,” she says.

Victoria says she has had an incredible response so far, and she is grateful for the extra time she has had with Ryan and Ruby.

When asked how she copes with such a tough diagnosis, Victoria says she just has to cope, “I don’t like being unhappy. I’m essentially a positive person and feel really well, despite the tumours. They’ve told me these drugs are not a cure, but my tumours have shrunk, and apart from taking a pill every day, I am living a normal life. They are not impacting significantly on my heart — I can exercise, work full-time as a legal advisor, go out as normal and, of course, look after our beautiful daughter. I’m lucky that the tumours are not near my heart valves, and with the new therapy, my heart function has gone from 51% back up to 58%.”

Victoria says that it would have been a very different story if the drugs hadn’t worked, “I was starting to find everyday life a bit harder last year and would likely have developed heart failure.

“As a family, we just live in the moment and try not to think too far ahead. Ruby keeps me sane, and I really don’t have time to dwell on things.

When they initially told me that my melanoma had come back, we didn’t know if I had days or weeks to live, and I learned to take one day at a time.

“I want to ensure Ruby has a happy, carefree childhood, and if the worst happens, that she has good memories of me. I don’t want her to remember me lying around being sick. She knows I take medication, but I’ve kept it from her. She’s such a happy child, and I want to keep that for her.

“I’m not unhappy. What’s happening sucks, but I keep positive, and I have a fantastic friendship group who is wonderful.

“It’s tougher on my parents as they live in the UK and feel so far away.

“A huge source of stress for us is that whether I live or not depends on how much money we can raise through the kindness of others as we can’t afford to personally fund the drugs I need for treatment in New Zealand. Potentially our only option is to move overseas and that’s pretty tough.

“I was only 33 when I was first diagnosed with melanoma, and I want people to know that this can happen to them.

“Melanoma is just so sneaky. You don’t know where it will turn up, and it definitely doesn’t discriminate. So, if you notice any skin changes, please get them checked out as soon as possible — it could save your life.

“My message is, don’t put off getting checked. You can’t just assume everything will be okay because it might not be, and you need to catch it early. When it gets to an advanced stage there really aren’t as many options as you might think.

Tags: melanoma | skin check
← Prev: September Newsletter Next: I have no doubt that the Spot Check Van saved my life →