Steve Hansen is well-known in New Zealand, and in other rugby playing nations, as an inspirational leader and former coach of the All Blacks. What isn’t as well-known is that he has survived melanoma on three separate occasions. 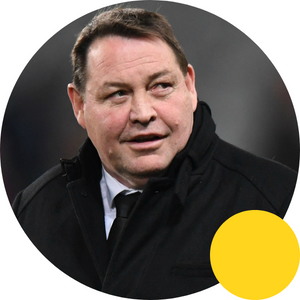 Steve, who is now 62, says he is thankful that each of his melanomas has been able to be successfully treated. “If you catch melanoma early, the worst you will get is a scar, and you’re most likely to be fine. However, the consequences of finding a melanoma when it has had a chance to spread can be awful.”

Steve first developed a melanoma in the mid-1980s which he discovered when he was drying his back one day. “I noticed it looked a bit different. My sister is a nurse, and she told me to go and get it checked out. I did, and it was an early-stage melanoma.

“Since then, I’ve made sure I really know my skin and I get any changes checked out quickly. Even so, my second melanoma was on my calf, around 2005, and by the time I went to the doctor and got it removed, it had spread a bit, and was in one of my lymph nodes. The lymph node was removed, and they took a hunk out of my leg; thankfully, they got all the cancer, and I’ve been okay. It was certainly a bit of a shock at the time though.”

Steve was diagnosed last year with his third melanoma, which was on his leg. It was also found and treated early, but he now goes to his specialist every three months, and regularly gets bits ‘chopped out and tested’.“

Having had several melanomas makes me a higher risk of getting more but it doesn’t stop me living my life or losing any sleep. My wife Tash and I live in sunny Wanaka, and I just make sure I cover up and use sun protection. I do check my moles a lot though.”

Steve grew up on a farm and recalls how there was no awareness about the dangers of the sun back then. “I’d be outside with my shirt off and definitely didn’t think about sunscreen and got my share of sunburn.“

A good friend of mine sadly just passed away from melanoma; he got it on his head. The thing about melanoma is, it can happen to anyone, anywhere, it doesn’t matter what colour skin you have, we can all get it. Being aware of your skin and getting anything unusual checked out is so important.”

Tags: melanoma | Prevention | skin check
← Prev: February Newsletter Next: I honestly thought it was a Pimple →