I honestly thought it was a Pimple

American-born secondary school teacher Thomas Tripp moved to North Canterbury in 2004.  A self-confessed sun worshipper, Thomas says he absolutely loves the sun and warmth, and grew up in an era when baby oil was applied to the skin to get a tan faster. 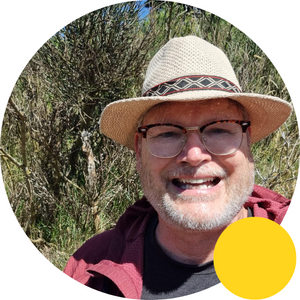 Thomas is now 61 years- old and was diagnosed with a rare form of melanoma in December last year.  He counts himself as incredibly lucky that he even went to the doctor to get himself checked.

“I was actually going anyway to get an updated prescription, and thankfully asked the doctor to have a look at a pimple that had suddenly appeared a couple of weeks earlier on my shoulder around my shirt line.  I was shaving one day and noticed it; I honestly thought it was a pimple and even tried to pop it. It looked nothing like I had imagined a melanoma to look like and so I really didn’t think too much of it.

“I found it in early November, and I went to the doctor that same month.  I am so grateful that she took a biopsy, as that probably saved my life.

“I will never forget being rung up a couple of weeks later and asked to come into the surgery.  I’d been down that track before as I had bowel cancer 10 years ago, so I figured it wasn’t good news.  I was told that my biopsy had confirmed what is called a spindle cell melanoma, and that I’d need to go to a surgeon for more surgery.

“They were worried it was in my lymph nodes as it turned out to be a deep melanoma.  It was 3.2mm deep and I had two surgeries before Christmas; one to completely remove the spot, and the other was a really wide excision and to check my lymph nodes.

“I got the news on 23 December that my lymph nodes were clear, and it hadn’t spread any further at this stage.  I felt nothing but huge relief.  I was told, however, that my cancer has a very high chance of coming back and that I would need check-ups every 3 months for the next two years.

“It really didn’t look how I thought a melanoma would – it was red, with regular borders, and not brown.  It just goes to show, you need to be really vigilant with anything different that appears on your skin, and get it checked out immediately.

“When I first got my diagnosis, I knew nothing about spindle cell melanoma, so I did a bit of research and came across Melanoma New Zealand. I reached out and spoke to their Nurse Educator, Gill, who is completely wonderful.

“She gave me so much information which really calmed me, and she talked me through my patient journey.  She was there when I needed her, and I am so grateful.

“I was really worried when I was diagnosed, and I felt so much better knowing information.  I have a massive scar; it’s 21cms long, and one friend told me I look like I’d been in a sword fight!  It’s a small price to pay for my life.

“I am so much more proactive with my skin checks now, and also with my sun protection.  If that pimple had been anywhere else on my body, I probably wouldn’t have noticed it and it would have been too late by the time it was discovered.  The thing is, melanoma isn’t always a mole, if you notice anything new or changing on your skin, just go and get it seen to.”