I don’t like to nag, and I do understand that farm-life is often all consuming, but melanoma could have killed him.”

62-year-old David Potts is a third-generation farmer, and he and his wife Dawn live on the 97-hectare farm in the Waikato that he grew up on.

In 2019 Dawn noticed that a raised slightly shiny lump on David’s forearm was growing and changing. “It was more like a big pea under his skin,” says Dawn. “David had it for so long, he couldn’t actually remember when he didn’t have it.” 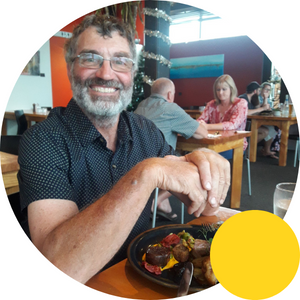 “When I mentioned the lump to David, he brushed it off and said it was fine. However, it was playing on my mind, and when we went to the Waikato Fieldays a few months later, I knew that there would be spot checks available at the Health Hub, where Melanoma New Zealand has its stand.

“I wasn’t sure that we would get to the Health Hub as there’s always so much to get for the farm at Fieldays, but around lunchtime, I saw we were getting close, so I grabbed David by the hand to take him over – willing or not! He actually didn’t know where I was taking him, and honestly, I thought his legs were only moving as he probably thought it was time to go and get something delicious for lunch.

“Thank goodness we went and got checked that day, but even then, we waited too long to follow up from that initial check,” says Dawn. “David had his lump examined and he was advised that he needed to make an appointment tomorrow with his doctor and get it taken out.

“However, with the farm being busy it took seven months until he went to see our GP, which with the wisdom of hindsight, he now appreciates was far too long. The spot had also started to bleed, he thought from being bumped, and the bleeding was what actually prompted him to visit the GP. However, as it turned out, the bleeding was from a scrape, but bleeding can be a sign of melanoma.

“Our doctor removed the lump straight away and the results came back saying it was a melanoma. David was immediately referred to a surgeon and booked for further surgery. I wasn’t surprised, but David was pretty shocked.

“It really hit us when the surgeon said, ‘don’t let fear grip you as it can weaken your immune system’. I think at that moment David finally understood the seriousness of his melanoma diagnosis; it’s cancer and it can be life threatening. They removed the melanoma along with some of his lymph nodes, and we were hugely relieved to find that it had not spread. We were really concerned waiting for the results as there had been such a delay in going to the doctor, and we realised he had been very lucky.”

Dawn recalls being frustrated with David’s complacency about going to the doctor. “I didn’t like to nag, and I do understand that farm-life is often all consuming, but melanoma can be fatal.

“David grew up on the farm, and he spent all day outside. His childhood friend also grew up on a farm, and he died of melanoma some years ago. At his funeral he recorded a message to ask all his friends to be aware that melanoma can take your life.

“For a lot of people like David, they just don’t think it will happen to them. I couldn’t believe that even knowing about his friend, he still didn’t take it seriously enough to go to the doctor as soon as he was told the lump was suspicious.

“I think it was because his lump wasn’t actually a mole, and so David didn’t automatically think it was anything to worry about. It was a like a little marble lump under his skin, and what we now know is that melanoma can be a wide range of colours, and it isn’t always a mole. David now has three monthly scans and is back to full health, but it was certainly a wakeup call to be vigilant in checking our skin for any changes.”

Tags: melanoma | Prevention | skin check
← Prev: Tattoos don’t protect your skin from melanoma Next: Out of sight, out of mind →