57-year-old Gordon Shaw felt the world had ended in October last year when he was told by his specialist that the red spot on his forearm was melanoma.

“The spot was in between the lines of two separate tattoos on my arm, so I noticed it pretty quickly and got it checked out by my specialist,” says Gordon. “If it had been in the darker area of my tattoo, I may not have seen it until it was too late.” 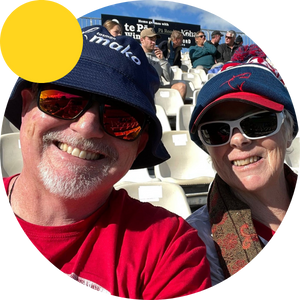 “I’ve been really lucky; I was due for a check-up anyway with my specialist, as I had previously been treated for a basal cell carcinoma, which had started growing again. He checked the spot on my arm and did a shave biopsy, which came back positive for melanoma. I was really shocked; it was so confronting to be told that I had cancer. I want to be around for my partner Wendy, kids, and grandkids, and I was initially pretty terrified.

“I had surgery last year to remove the melanoma and am shortly to have a second surgery as there were a few cancer cells close to the margins. However, I’ve been told my cancer has been caught early and my chances of making a full recovery are excellent.

“The thing about tattoos is that they are just on the surface of your skin, and they don’t protect you from the sun – you still need to be vigilant protecting yourself when outside. Changes to your skin can also be really hard to detect on the areas where your skin is covered with tattoo markings, especially if they are very dark tattoos. My advice to anyone, but especially those with tattoos, is to have regular skin checks by a healthcare provider. Our sun is the harshest in the world, and our rates of melanoma are the worst, so we are all at risk simply by living in New Zealand,” he says.

With fair Scottish skin, Gordon has a history of sunburn when he was younger, recalling growing up in Wellington and “getting regularly burnt like a lobster”.

“There wasn’t much focus on sunscreen back then, and I’d think nothing of getting burnt, then going back out in the surf the next day, with no protection.

“Since I have started sharing my story with friends and colleagues, I am amazed at the number of people who have also had melanoma. It’s really important that we raise the awareness of melanoma – it’s cancer and it can take your life if you don’t catch it early.”

Gordon and Wendy live on a semi-rural property in the Nelson/Tasman region, and enjoy the outdoors, walking, biking and swimming. Since his diagnosis, Gordon is very focused on sun protection, including ensuring there are shaded areas on his deck, and he’s also given up his love of baseball caps as they leave his ears exposed. He now wears wide brimmed hats, covers up, and is vigilant about sun protection and checking his skin for any changes.

“I’ve talked to quite a few of my motorsport mates with tattoos about the importance of getting their skin checked out – my life has likely been saved due to being diagnosed early. I also need to thank Wendy for encouraging me to go to my specialist appointment when I did. The appointment was on the 19th of October, which is also Wendy’s birthday. I was going to cancel, but she made me go. I don’t like to think what might have happened if I had waited,” he says.

Tags: melanoma | Prevention | skin check
← Prev: I honestly thought it was a Pimple Next: I don’t like to nag, and I do understand that farm-life is often all consuming, but melanoma could have killed him.” →