Ryman Healthcare is donating $535,000 to charity partner Melanoma New Zealand after a huge year of fundraising around the country. 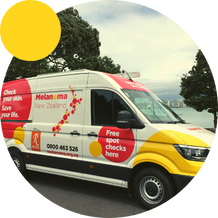 The support included the funds to allow Melanoma New Zealand to buy a Spot Check Van, which has been on the road since February and has already uncovered nearly 400 suspicious lesions in that time.

Delwyn Hardgrave, a resident at Logan Campbell Retirement Village in Auckland, says if it wasn’t for the purpose-fitted Melanoma New Zealand van visiting the village that day in May, her future may have looked quite different today.

While many residents had taken advantage of the van’s visit and booked an appointment to get suspicious-looking spots checked out, Delwyn had just returned from the doctor with her husband David who had had a squamous cell carcinoma on his ear removed.

“I was waiting in the village foyer minding my own business while David parked the car when I was suddenly approached by someone from behind!” laughs Delwyn, 74, who moved into the Greenlane village three years ago.

That somebody was Melanoma New Zealand Nurse Educator Gill Rolfe, whose eagle eyes had spotted an unusual looking mole on the back of Delwyn’s calf.

“She asked if I could pop on the van so she could have a better look at it with her dermatoscope and then after that she advised me to go to my GP promptly, and not to leave it for three months.”

Delwyn took Gill’s advice and two weeks later visited her doctor who said he could see why she was concerned. The GP did a biopsy which confirmed Delwyn had a melanoma.

There is a history of cancer in Delwyn’s family and she had first noticed the mole on the back of her leg five years ago, but it was quite hard to see.

“I hadn’t noticed that it had started to spread and had ended up being many colours – I know now that that’s a good sign that it’s melanoma,” she says.

Delwyn’s next task was to have the mole cut out at Auckland Hospital.

“It’s healing very nicely,” she says, reflecting on her journey to date. “They are fairly sure they have contained it, so I feel like one of the lucky ones.

“I just feel very, very fortunate. It was an absolute miracle that Gill was walking past at that moment and that I was standing in such a way that she noticed it. I was in the right place at the right time, and it saved my life!”

The Spot Check Van has been touring Ryman villages and other community locations around New Zealand since its launch in February, providing education and free spot checks.

“We feel very grateful for the van initiative and for Ryman to have them come here.

“We thoroughly enjoy living here and what Ryman does for us is amazing.”

Since launching the van earlier this year, more than 2,700 spot checks have been performed and nearly 400 suspicious lesions found, including melanomas, that have been referred on for further evaluation. Each visitor to the van is also provided valuable education, empowering them to know what to look for when checking their skin.

“We are so grateful to Ryman Healthcare for its extraordinarily generous support. The impact the van is already having in the community has been significant,’’ Andrea said.

“Without Ryman Healthcare and its wonderful residents, our Spot Check Van would not be on the road helping so many people, just like Delwyn.”

Ryman Healthcare Group Chief Executive Gordon MacLeod said supporting the melanoma cause had brought the Ryman community together. Ryman has donated $4.6 million to charities through its annual partnership programme since 1999.

“We’ve raised a record amount and it is an absolute pleasure to support Melanoma New Zealand. Seeing the van on the road and knowing the difference it has made to people like Delwyn, means a lot.

“We can’t thank them enough for what they do for people.’’

Ryman has also donated $20,550 to Melanoma Institute of Australia from fundraising in Victoria.

New Zealand has one of the highest rates of melanoma in the world. There are more than 6,000 diagnoses of melanoma every year and around 300 people a year die from melanoma. The chances of developing melanoma increase with age and most melanomas are found in people aged 50 years or older, though younger age groups are also at risk.