Aucklander and early childhood teacher Sarah Dixon’s world turned upside down when she was diagnosed earlier this year with melanoma. At just 33, married to Leigh, with a 12-year-old son, she didn’t realise what melanoma was, let alone how serious it could be, until her uncle died 12 months ago from the disease. 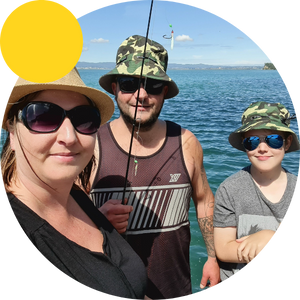 “I remember my dad saying after my uncle died that we all needed to be careful, and he mentioned the mole I had on my arm. He nagged me about it a bit, and I said it was itchy sometimes and that it had grown bigger. I knew I had to go and get it checked out, and earlier this year, I saw on Facebook that the Melanoma New Zealand Spot Check Van was going to be at our local Warehouse store, and was offering free spot checks on the weekend.

“Mum went with me and waited outside the van while I got checked, and as soon as the nurse Gill saw the mole on my arm, she gently told me that it looked suspicious and that I needed to go to my doctor. She was really professional, but also so warm and supportive; I felt that even though I was being given some challenging news, I wasn’t alone in that moment. Gill’s wonderful manner kept me calm but also made me very aware that I needed to do something.”

“I went to my GP, who shared Gill’s concerns, and she removed the mole. When the results came back positive for melanoma a couple of weeks later, I was just so shocked and burst into tears. Finding out you have cancer is terrifying enough, but it also coincided with my mother-in-law being seriously ill with cancer at the same time. The toughest thing was telling Leigh, who was pretty scared initially as to what might happen to me. I needed some follow up surgery as a precaution to make sure there was no cancer left, and thankfully, my melanoma was caught early, and I am hopefully cured.

“I can say without reservation that my spot check on the van that day has saved my life. I know it’s wrong, but I probably wouldn’t have gotten around to seeing my GP until I was sick with something else, as life is so busy and there is always a reason to put off making an appointment. The van was just so easy and accessible for me, all I had to do was line-up. Waiting weeks or months longer to get that mole on my arm checked out could have had devastating consequences; melanoma is cancer, and it can kill you.

“I have learnt so much about this disease since I was diagnosed, and I really want to get the message out there that the earlier you get a melanoma detected, the better your chances of survival. I never understood how strong the sun’s rays are, and how awful New Zealand’s melanoma statistics are until my family was impacted.

“Growing up in Auckland, with our long hot summers, I was a typical Kiwi girl who was always outdoors. As an adult I have continued to really enjoy the outdoors, and love gardening and just pottering around outside. I have never really thought too much about being overly careful in the sun, but since my diagnosis, everything has changed. I actually feel pretty nervous about going outside; I know this will pass, but I will never again be so relaxed about ensuring my skin is protected from the sun.

“I work with children under the age of 5 and I am really careful, making sure that they are covered up, wear hats, and put on sunscreen before we go outside to play. It is just so important that we make sure that our little ones are protected and are taught how to keep themselves safe in the sun as young as possible.

“This year has been tough on our family; my mother-in-law passed away recently after losing her battle with cancer, and my dad recently had a melanoma diagnosed on his head. I have had to start having conversations with my 12-year-old son about cancer, and although I find it difficult, I know that making sure he understands the risks we face from the sun, is my responsibility as his mum, and is just so important.”