74-year-old Delwyn Hardgrave was waiting for her husband David in the foyer of the Logan Campbell retirement village in Auckland’s Greenlane, when she was approached by Melanoma New Zealand Nurse Educator Gill Rolfe. 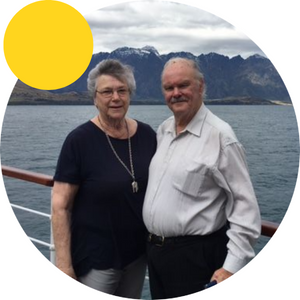 “Gill had seen a mole on the back of my leg from across the room and came over to ask me if she could take a closer look.

“I’d had this particular mole for about 5 years, but because it was on the back of my leg it was hard to see, and I didn’t realise that it had changed. Gill probably saved my life that day; as Ryman’s charity of the year, the Melanoma New Zealand spot check van had been visiting the retirement village where David and I live, however, neither of us had planned to go and have a free spot check that day. David had just dropped me off in the foyer while he went to park the car, as we were returning from an appointment with his GP to get a squamous cell carcinoma cut out of his ear. ”
— DELWYN
“Gill was literally walking through the foyer as I was waiting for David and noticed my mole on the back of my leg; it was an absolute miracle that she was walking past at that moment, and that I was standing in such a way that she noticed it.

“Gill said she would like to take a closer look at it and suggested I pop into the van so she could examine it with her dermatoscope. She said to me that I needed to go and see my doctor, and not to wait.”

Two weeks later, Delwyn went to her GP, who said immediately that he could see why Gill had been concerned. He did a biopsy which confirmed that I had a melanoma.

“I’ve had some more surgery, and thankfully it was caught early, so my prognosis is really good. But things could have been very different if Gill hadn’t spotted it across the foyer that day. I am just so grateful that I was in the right place at the right time.

“I have twin daughters in their 40s, and my diagnosis has been pretty upsetting for them. They are now going to get their skins checked regularly. We have a family history too, as my father had a melanoma on his back which was diagnosed in his late sixties. My diagnosis has been a bit wake up call for my family; we all need to be vigilant with our skin checks as early detection can literally save your life.

Tags: melanoma | skin check
← Prev: Melanoma New Zealand launching "Because I checked my skin campaign" to save lives Next: Family History Increases Your Risk Of Melanoma →